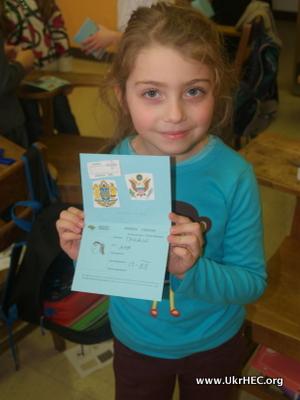 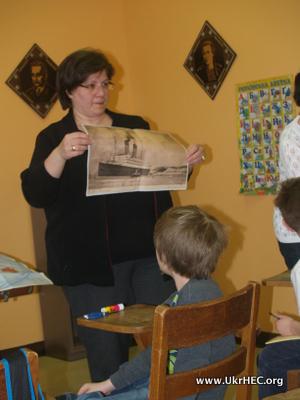 On February 16, 2013 the director of the Patr. Mstyslav Museum of Ukrainian Heritage Natalia Honcharenko and Ukrainian Historical and Educational Center archivist Michael Andrec, who presented introductory lectures and activities related to Ukrainian immigration for the students of the St. Andrew School of Ukrainian Heritage Studies in South Bound Brook, NJ.

The younger students had the opportunity to imagine themselves as travelers on an ocean-going steamship, and to think about what essential and important items they might take with them on a long journey to an unknown land. They looked on with interest as the suitcase brought by Ms. Honcharenko revealed those things that an immigrant might have brought: photos of loved ones, a notebook with their addresses, a Bible, an embroidered shirt and ritual towel...

But one can't travel abroad without a passport. So, they made their own, drawing self-portraits as "photographs", and filling in  their names, birth dates and nationalities. They pasted in cut-out "visas", which were then stamped with the date and time by Ms. Honcharenko. After proudly having their picture taken with their new "passports", they showed them off to their classmates and parents.

Students of the middle and upper grades learned about the causes of Ukrainian immigration during different historical time periods and the difficulty of the ocean crossing. They imagined what it was like to start a life in a new land with only those articles that could fit into one or two suitcases, and not knowing a foreign language or their new country's customs. Based on copies of archival documents, the students were able to trace the life of a real person, Olexa Balabas, who began his long journey in 1919, passed through Constantinople, lived in Prague and Germany, and eventually settled in Chicago in 1950. They tracked his movements in detail by studying his passport and its stamps and notations.

The teenagers were intrigued by a telegram, the mid-20th century information transmission equivalent of today's text messages. They also analyzed the front page of the newspaper "Svoboda" published in 1904. It depicts a worker standing on the shores of America with smoking factory chimneys in the background. The man stares intently into the distance, as if trying to make out his overseas homeland. And on the other side of the ocean are depicted the symbols of education and of the Ukrainian people: a church, Taras Shevchenko and his "Kobzar", a wreath and musical instrument, a scroll of parchment and goose quill, and a Cossack hat and mace.

Mr. Andrec concluded by singing a folksong that he learned from his mother Anna Andrec in 1986, who in turn had learned it from Magdalyna Kostevich Andrec of the village of Bos'ko (Polish "Besko") in Sanok county, Poland. In this song, an immigrant girl laments his fate:

The song inspired Ms. Yaroslava Danyschchuk, teacher of Ukrainian language and literature, to recall the story of her family, members of which left during the first wave of emigration from Ukraine at the beginning of the twentieth century. Ms. Danyshchuk urged her students to support Ukrainian immigrant culture and to pass on the linguistic, cultural and spiritual treasures of their people to future generations.