This collection contains material relating to the life of Oleksii Balabas and his family in the Kuban' region of Russia, Prague, Germany, and Chicago. It includes six volumes of diaries from the 1940s and '50s, official and legal documents, correspondence, writings on Kuban' history, and photographs. 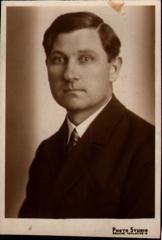 Oleksii Balabas was an "ordinary man" whose life encapsulates in microcosm a great deal of the history of Ukrainians in the first half of the 20th century.

He was born in 1890 in the "stantsia" Slovians'ka in Kuban' (Russian northern Caucuses). He was conscripted into the Russian Army upon the outbreak of World War I, attended cavalry school and joined as an ensign with the Slovians'ka regiment, with which he fought on the Western and Turkish fronts. After the 1917 Revolution he joined the government of the Kuban' People's Republic, associating closely with many of the top government leaders. After the takeover of the government by the monarchist "Black Hundreds" counter-revolutionaries he was arrested and exiled in 1919 to Istanbul. In 1920, he moved with his family to Prauge.

In Prague, he worked as a compositor in the print shop of the social-democratic newspaper "Právo Lidu" while furthering his education. He eventually defended a doctoral dissertation from the Charles University in Prague, and became a teacher and administrator of the Ukrainian Gymansium in Modřany.

Fleeing ahead of the Red Army in World War II, he spent time in the Karlsfeld, Füssen, and Mittenwald DP camps. He served as teacher and director of the Mittenwald camp Gymnasium. His wife Ievheniia (Pobidonostseva) died in 1947, and in 1950 he emigrated to Chicago. He worked for the Czech-language newspaper "Svernost" and taught at the Ukrainian Orthodox school. He later joined the printing establishment of Prof. Terlets'kyi where he worked as a linotype operator. He moved to New Jersey after prostate surgury, where he likely worked in the printing shop at the Ukrainian Orthodox Church of the USA in South Bound Brook.

The Oleksii Balabas Papers contain material relating to the life of Kuban' native of Ukrainian descent Oleksii Balabas and his family in Russia, Prague, as a Displaced Person in Germany, and in Chicago. Of particular importance are six volumes of diaries in which he describes his life in Germany and Chicago and his attempts to deal with his grief over the death of his wife. In addition, the collection has official and legal documents from pre-Revolutionary Russia and his immigration into the USA, family and personal correspondence, writings on Kuban' history, and photographs from Kuban', Prague, Germany and the USA. Two letters dated 1933 from family members in Kuban' make reference to the Holodomor.

The collection is arranged in 5 series as follows:

The collection is open for research use. Please contact the archivist (archives@ukrhec.org) for more information and to make arrangements.