Theophany in the DP camps 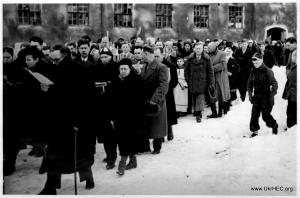 January 19th is the Eastern Christian feast day of the Theophany (according to the Julian Calender). In Ukraine, it was traditionally celebrated by a procession from the church to a river or stream, where a hole would be cut through the ice and the water would be blessed. Wherever they were in the world, Ukrainians tried to maintain this tradition, even in the extreme conditions of the post-WWII refugee camps.

This photograph is from the Oleksii Balabas papers, and shows a Theophany procession in the Displaced Persons camp in Mittenwald, Germany in the late 1940s.