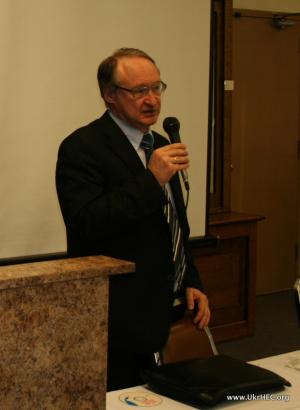 On February 20, 2011, the noted historian and archeologist Dr. Volodymyr Mezentsev of the University of Toronto gave an excellent lecture about the ongoing excavations at Baturyn, the capital of the Ukrainian Cossack State and home of Het’man Ivan Mazepa.

About 70 students and scholars from the universities of Chernihiv, Nizhyn, Luhansk and the Kyiv Mohyla Academy have participated in the excavations, in which Dr. Mezentsev participated as the CIUS research fellow responsible for the Baturyn project.

Located in the Chernihiv region of Ukraine, Baturyn was the official capital of the Kozak Hetman state in 1669-1708 and 1750-1764. The town reached its zenith during the reign of Hetman Ivan Mazepa (1687-1708). In 1708, after Mazepa rebelled against the growing Russian domination of the Hetmanate, Tsar Peter I destroyed Baturyn completely. Tsarist troops massacred its Kozak garrison, as well as the civilian population of about 15,000. The town was rebuilt as a capital of the waning hetman state during the rule of the last hetman, Kyrylo Rozumovsky (1750-1764). However, following the abolition of the Hetmanate by Catherine II in 1764, Baturyn gradually declined.

Only after Ukraine established its independence, did excavations of Baturyn become possible, beginning in 1995. By 2004 archaeologists had completed excavations of the remnants of the hetman's central palace in the town's citadel. Researchers have established that this one-story brick structure was 26 by 20 meters in size and had porches, a central corridor and several rooms or halls with brick flooring and tiled stoves. This palace was likely designed in the Ukrainian or Kozak Baroque style. Nearby, the team has also discovered the foundation trench and the adjacent graveyard of the wooden Resurrection Church endowed by Mazepa in the 1690s and ruined in 1708, as well as evidence of numerous smaller buildings. The Baturyn expedition has yielded valuable archaeological materials for exploring the urban development of the capital of the Kozak Hetman state, particularly during its golden age under the rule of Ivan Mazepa. The excavations have also brought to light much new evidence of the total devastation of this distinguished Ukrainian town in 1708. The project is still ongoing, and further information can be obtained directly from Dr. Mezentsev: (416) 766-1408, v.mezentsev@utoronto.ca.

The lecture was attended by approximately 50 people and was very well received, judging by the questions and informal discussions that followed his presentation.