The Oleksii Matuch Papers contain what appears to be a comprehensive collection of ephemera related to the Ukrainian-American community in Buffalo, NY during the late 1950s and early 1960s, as well as some correspondence and personal documents. 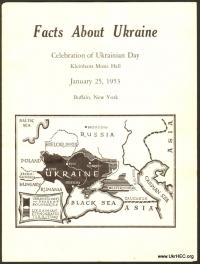 Not much is known about Oleksii Matuch (or Matukh), other than what is contained in his death announcement in the "Svoboda" newspaper (Vol. 84, No. 214, Sept. 30, 1977): he was a resident of Buffalo, NY, was a veteran of the Ukrainian War of Independence, had been the long-time president of the "Tovarystvo Spryiannia UNRady" ("Association of Supporters of the Ukrainian National Council"), and was a parishoner at Holy Trinity Ukrainian Orthodox Church in Buffalo. He died on September 26, 1977 at the age of 74.

It appears from the contents of the collection that he took a very active interest in the activities of the Ukrainian-American community in Buffalo. By the mid 1950s, the post-WWII Ukrainian refugees had had a chance to establish themselves in their new country, and the next decade was a period of intense activity in this immigrant community.

This collection consists primarily of fliers, programs, posters, and related ephemera for Ukrainian-American community events in Buffalo, NY, as well as church bulletins and other parish publications, and mailings and publications of Ukrainian-American organizations (most notably the Ukrainian Congress Committee of America). The collection also contains a small amount of correpondence, most notably with Bp. Platon of the Ukrainian Autocephalous Orthodox Church.

Some of the event posters and other material do not indicate the year of the event (only the month and day). These have been filed at the end of the correponding folder. In addition, some posters and fliers have hand-written annotations.

The collection is arranged in three series, as follows:

The collection is open for researcher use. Please contact the archivist (archives@ukrhec.org) for more information and to make arrangements.