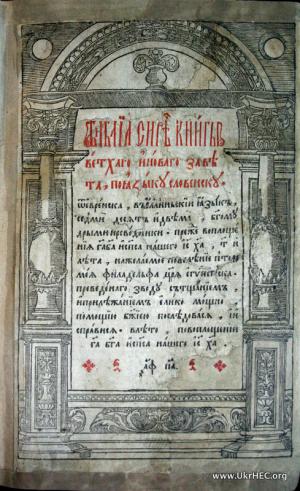 In 1580-81, Ivan Fedorovych published the first complete Church-Slavonic Bible printed using moveable type. In the 1560s, he was likely involved with the first printing establishment in Moscow, but in 1565 the shop burned to the ground and he left the city. The fire was likely instigated by the local book scribes, for whom his printing press was creating unwelcome competition.

After living briefly in L’viv, he moved to Ostroh, where he printed his Bible under the patronage of Prince Konstantyn Ostrohskyi. It quickly became the standard edition of the Bible in the East Slavic world, and played a critical role in sustaining Orthodoxy in the Polish-Lithuanian Commonwealth.

Only 300 copies of the 1581 edition of the Ostroh Bible are thought to exist today, and the Center is privileged to have one of them in its rare book collection.