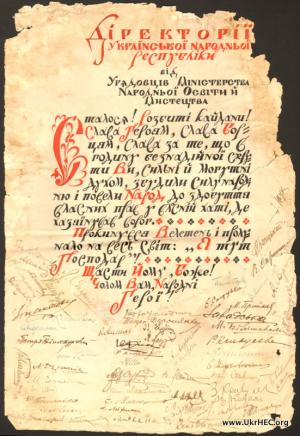 Yesterday was the 94th anniversary of the first declaration of Ukrainian independence in 1918. From that period is this somewhat damaged certificate that was presented to the high-ranking officials of the government by the Ministry of Public Education and Art. The fact that it survived at all is a bit amazing, given that it went through two wars and multiple stages of exile on its trip from Kyiv to New Jersey. Despite its damage, it is still quite a handsome and historically important document.

The hand-lettering on this certificate was done by the artist and illustrator Heorhii Narbut. Narbut was born near the historic town of Hlukhiv in northeast Ukraine, studied art in St. Petersburg and Munich, and is best known for designing national seals, postage stamps, and paper currency for the Ukrainian National Republic. He died of typhus at the age of 34 less than two years after creating this certificate.

Among the signatures on this document is that of the well-known Ukrainian Impressionist and neo-Byzantine artist Petro Kholodnyi (the Elder), who at the time was serving as deputy minister of education.