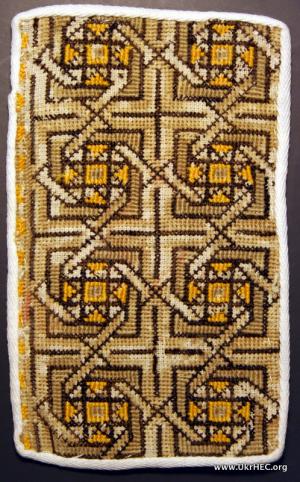 This fragment of embroidery came from Kosmach in the Ukrainian Carpathians, a village well-known for its strong folk art tradition. It is part of a group of over 100 items collected by Petro Kashchenko in the early decades of the 20th century throughout Western Ukraine. The dating of this particular fragment is uncertain, but it is possible that it was made in the 18th century, making it one of the oldest examples of Ukrainian embroidery in any museum in the Western Hemisphere.

Although some of the stitching has been lost and the natural dyes have faded over the 200-odd years of its existence, the pattern is still clear: it is the "stars inside octagons" motif that is very common in Ukrainian embroidery even today. What makes it unusual is the addition of the radiating diagonal lines, which unambiguously identify these "stars" as a sun symbols (or "swastikas"). This symbolic representation of the positive, life-giving power of the sun was common in many forms throughout Eurasia for millennia before Hitler appropriated it and turned it into a symbol of hate. In fact, one of the earliest archealogical representations of a swastika was found in a 10,000 year old Paeleolithic site near the Desna River in Ukraine.